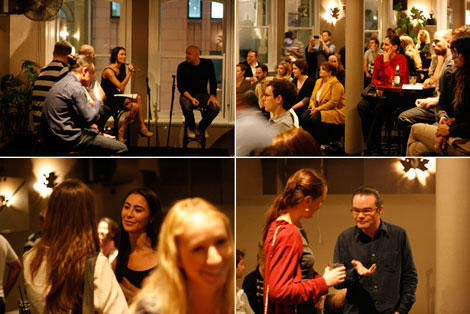 How do you turn inspiration into action? How do you learn from failure? How do you help organisations to innovate?

These were some of the questions posed at IF Talks - Making Ideas Happen – a ‘deliberately small’ gathering of thinkers and doers in Sydney on April 20.

For many (see Twitter #iftalks) the key take away was how to learn from failure, a popular discussion on the HBR blog of late too. For me, though, the key theme of the night was developing the right environment for innovation.

For example, Seb Chan believes the collaborative and supportive environment he cultivates at the Powerhouse Museum is essential for allowing ideas to flourish. He protects his staff  from the bureaucracy that can nibble away at innovation and offers them an environment that supports the co-creation of ideas. He contrasted this with the traditionally competitive nature of large corporations.

Having worked for Nokia, I can understand how creativity can be stifled by corporate structure. Yet amongst the competitive Nokia corporates, there were smaller teams working on the UI and UX for mobile devices that were creating deeply creative and innovative work. The managers of each team were doing exactly what Seb Chan has described: protecting their staff from bureaucracy and allowing the multidisciplinary teams to work collaboratively. 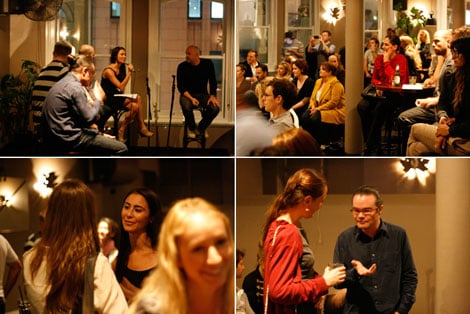 Pictures thanks to Ben Rennie from Uncluttered White Spaces

At the IF Talk, Tim Longhurst suggested that this sort of set up, where smaller projects are set up within larger companies, can be a way of demonstrating new ways of working without scaring “Status Quo Man” – the person who just wants to keep things the way they are. Companies can then learn from the example. Injecting agility into large corporations, or doing away completely with corporate structure (!) was another suggestion of how to create the right environment for innovation.

Jodie Fox, founder of Shoes of Prey, has a nimble organisation that also supports the collaborative creation of ideas. She is such an evangelist for co-creation that she made her company all about the customer: they can design their own shoes. Jodie noted how happy her customers are to be so thoroughly involved in the process of design.

Curating discipline in your environment and work practices is another methodology embraced by many of the speakers. Whether it’s by breaking up larger problems into smaller ones, using particular methods for capturing the seeds of ideas, or gaining clarity by using different coloured post-it notes to identify task priorities, the speakers all seemed to promote discipline as a way to get your house in order and thereby support the creation of ideas.

For my part, I like to visualise a problem or project as a linear timeline. When writing my masters thesis, for example, I set up my document as a table so that I could see my argument in its entirety, all four metres of it! Each chapter was contained within a column. Running vertically, each row was used to house main themes, introduction, main argument and conclusion for each chapter. Because of the discipline involved in the format, I could see in one glance if my argument made sense.

On the opposite end of the scale to discipline is play, an area that all of the speakers agreed could help organisations innovate. Seb Chan is slightly wary, however, of thinking that the only way to learn from play is to incorporate it into your work life. He likes to play outside the office and to bring in the findings from his hobbies to the office when appropriate. Rachel Botsman also warned about the disingenuous nature of having forced ‘playtime’ at work.

Of course having a work environment where failure is acceptable is also important. Rachel’s advice about ‘falling forward’ with each failure and learning from your mistakes was supported by Jodie and Ash Donaldson’s call for regular measurement of your failures. Ash also mentioned the importance of creating multiple prototypes of your ideas so that you can test early and often and learn from mistakes without wasting time and effort.

So the question is, does the environment at your work support innovation? Do you prototype, test, iterate, and test again? Do you talk about your failures as well as your successes and do you involve the whole organisation in these discussions?

I’m very much looking forward to the next installment of IF Talks and the continuing discussions at #iftalks. Thanks to Ben Rennie and the Uncluttered White Spaces team for such an inspiring night.