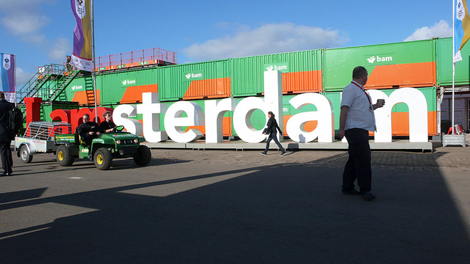 In September I was lucky enough to go to Amsterdam to attend Picnic, a three day festival of design, science, technology, media and business. This year the focus was on urban futures and how city development can be implemented in a more sustainable and human-focused way. Presentations were on issues across the broad spectrum of the theme from city planning, the use of data in the city, citizen engagement and sustainability. My pick of the presentations are listed at the end of this post along with links to videos of the presentations (if available). 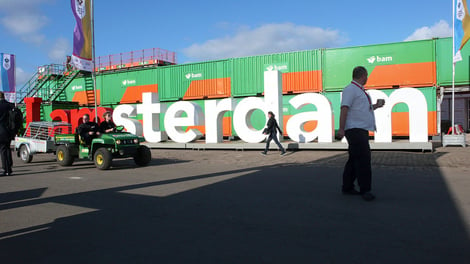 Early morning on the first day of Picnic 2001.
For me, there were four re-occurring themes.

Collaborative development
Many presenters agreed that it is better to involve the end user in the planning of any product or service. Different ways were explored during the festival of harnessing user-knowledge such as workshops, participatory design sessions and gathering user-generated data. Waag Society from Amsterdam conducted a workshop called the User as Designer which looked at some of the participatory design methods that they use to collect user knowledge. This included Serious Lego (a method we have used at Meld Studios), scenario building and rapid prototyping. To read more about these methods you can view the book here. 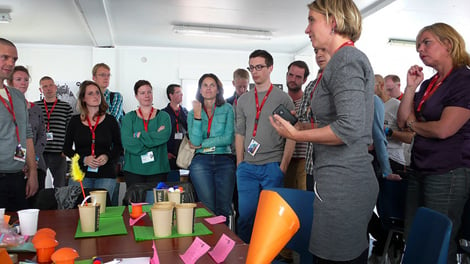 A presentation during the User as Designer workshop.

Start small and scale up
In order to successfully implement new ideas in any city or community, speakers seemed to agree that it’s best to start small and scale up rather than trying to implement the whole kit-and-caboodle from the beginning. To show that collaborative development and participatory processes are worthwhile, speakers suggested working first on small projects to gain confidence of the client. If the process works then the client will have the confidence to hire you for larger projects. If the project fails, then the client will not lose face. A few speakers also suggested that calling something a pilot (or a pop-up) will help clients accept a project idea more readily as they will feel that it is only temporary and they do not have to over commit.

Get in and do it yourself
Allowing citizens to participate and contribute to the development and maintenance of their city by things like micro-volunteering was a re-occurring notion. Speakers called for a shift in perception that the government should be solely responsible for everything in the civic space and they looked for ways to convince citizens that they should take on some responsibilities in order to make their city better. It was an oft repeated statistic that 70% of the world’s population will live in cities by 2050, so designing now for this crowded urban future is essential.

This civic responsibility obviously needs to be assigned correctly, as it is not feasible for individual citizens to be responsible for things that require larger management (such as waste collection). But, there were many things suggested that people could do within their communities to improve the Third Place in which the public interacts. One idea was that people could have their taxes reduced in exchange for micro-volunteering.

Applications such as Verbeterdebuurt (Fix my Street) allow citizens to post an idea to improve their community and get their neighbours to vote on it. Any ideas with more than 10 votes are submitted to council as a petition.

A few speakers mentioned that publicising results is a very important part of collaborative development as citizens need to see that their work is actually getting results. At the Picnic festival, tweets were brought into the public space by way of a roaming whiteboard (see image below). This could be an interesting way in which data could be made public and is reminiscent of the Blackboard Blogger of Liberia who became famous for doing a similar thing on the highways of an information-starved country. 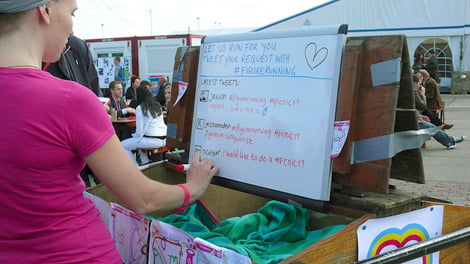 Live tweets on a roaming whiteboard at Picnic festival.

Designing for participation
How are places designed so that people want to interact and participate? Can we design a space so, as festival-goer Roel Simons said, “people can’t help but contribute”? Frog suggested one method via their Chroma interactive ecosystem where they designed the space so that visitors would have to run into the lights and thereby trigger a reaction that they would have otherwise been oblivious to. Kim van der Leest introduced the idea of the natural playground: child-friendly spaces designed with water and mud and lots of chances of unstructured play that are apparently more conducive to child development. I am still trying to work out how can we harness these ideas in our workshops at Meld Studios (minus the mud of course), and I’ll no doubt blog about this in the future.

I’d like to thank Meld Studios for sending me to the Picnic festival. I hope I’ll be able to return another time.