Co-designing how to communicate the risks of illegally dumped asbestos 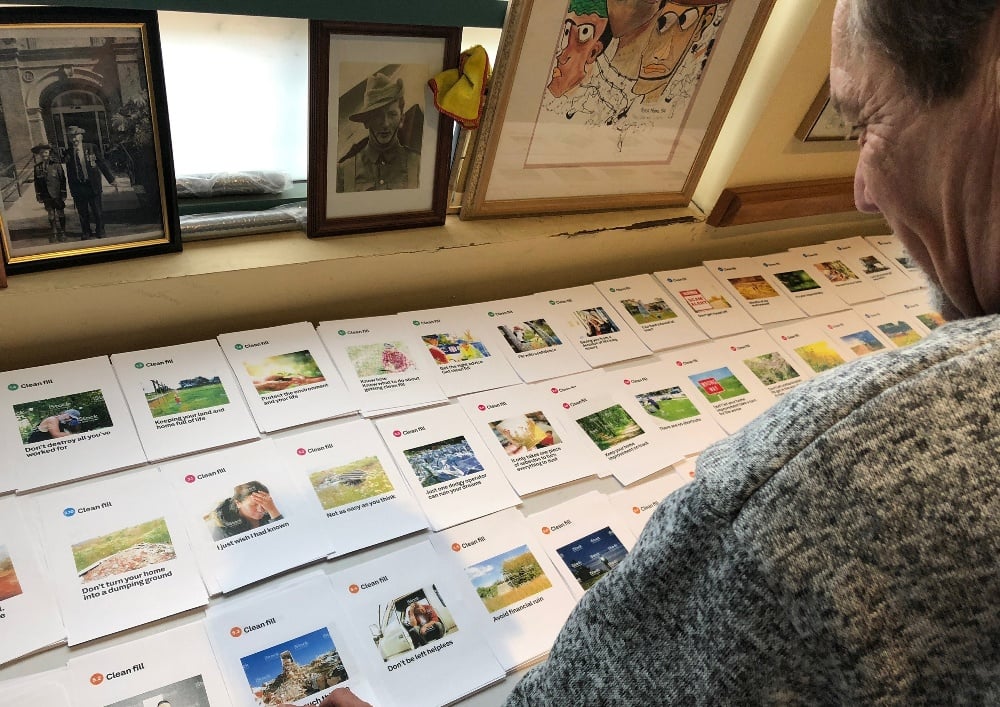 NSW Environment Protection Authority (EPA) partnered with Meld Studios to take a human centred approach to developing and evaluating effective messaging to inform communities about the risks of receiving contaminated ‘free fill’. Involving audience members in the design of these campaigns (as shown in the image above) made a significant difference to awareness and behaviours. Here's why!

There is a significant impact on the lives of people who unwittingly receive soil on their land contaminated with asbestos. As stated by a project participant:

“We were looking for free soil for our land. They came with a truck. For the life of me I didn’t even think it would have asbestos. At first we were absolutely furious. You get guilt thinking of my family. Financially it’s a huge burden, we’re looking at around $300,000 clean up costs. I went into a depression.”

EPA's challenge was to design effective communication of the risks in accepting ‘free fill' on their land, to reduce the impacts of illegally dumped asbestos on the environment, community, family, financial and personal wellbeing.

Recent research has shown how cultural perspectives explain differences in people’s responses to the same environmental risk. Understanding these values in the context of the risk of contaminated fill was vital to the design of effective communications.

Rather than a ‘scare campaign’ attempting to stop people using ‘free fill’ on their land, NSW EPA and Meld Studios undertook a values-based approach to co-designing communications with the people most likely to be significantly impacted by ‘free fill contaminated with asbestos.

We began with understanding the current experience of people who have had asbestos illegally dumped on their land. We used an ethnographic research methodology to reveal behavioural drivers and decision pathways for sourcing and use of free soil/fill.

We then explored opportunities and potential futures for values-based communication of risks of sourcing ‘free fill’ in contextual workshops with people in semi-rural NSW. Our featured image shows a project participant engaging with proposed communication materials.

We measured the effectiveness of proposed communications in changing attitudes and behaviours by conducting quantitative pre- and post-evaluation of a pilot campaign.

The resulting communications made significant, positive, social impact on attitudes and behavioural intent of people in semi-/rural areas sourcing ‘free fill’ on their properties.

The communications increased awareness of ‘free fill’ risks, with over 96% of people seeing the campaign agreed ‘free fill’ might contain asbestos.

Critically, communications gave people knowledge and confidence to take positive steps in sourcing fill rather than be stopped by fear of the risk, or acting recklessly. Quantitative evaluation showed there was significant difference (+18%) of intention to ‘check fill' among those who had seen the communications versus those who had not.

Workshops with people in context explored how different sets of shared values produced a plurality of views on the natural environment which influenced how they perceived and responded to risk. As a result, three different communications were developed to communicate the risk to people of using ‘free fill’ on their land.

Our research also showed the vulnerability of those in regional communities who do not have English as a language. As a result, a multi-language campaign was developed.

In 2021, Good Design Australia recognised this project for outstanding design and innovation in the Social Impact category.

“Great example of design being used in a way that increases the EPA getting the outcomes they want and also better protecting the people who otherwise may have resisted engaging. The idea was well researched and communicated and ultimately scalable. Terrific process and project. Overall, a really impressive example of design for impact and a standout project that ticks every box for good design in this category. Congratulations.”

Contact us if you'd like to learn more about co-designing and evaluating marketing campaigns, and designing services for environmental outcomes.