I remember a couple of years ago posting on a social media site “Why are the digital displays at Flinders Street so badly organised?” To me, these 6 screens were just a list of trains with no logical sequence. I couldn’t figure them out. They weren’t sorted by departure time or platform number, and they weren’t in alphabetical order.

The tirade I got in response from my train-nerd friends, made it very clear that I was a bit dim because obviously they were sorted by “line groupings”.

So I was delighted to be given the opportunity to work on this redesign project with Public Transport Victoria (PTV). They were very aware of the limitations of the current design, and had an opportunity to make some changes to align with the new colour coded train network map.

We created a prototype station in a warehouse and over the course of a week, we ran 5 testing sessions with 6 participants in each session. We iterated the designs after each session based on what we learnt.

We paired each participant up with an interviewer so they were one-on-one for the whole session. We asked participants to “think out loud” so that we could not only watch what they did, but understand how they were thinking about it.

Each participant navigated around the mock station four times:

How the designs changed over the week

My favourite example of how the designs changed with testing, is all the different ways we tried to demonstrate the train stopping pattern. The screen shown here is the one that is at the top of the escalators, before you go down to the platform. 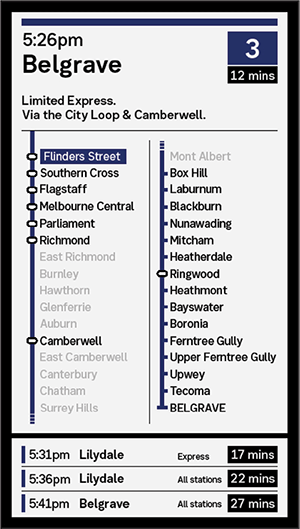 ITERATION 1: This was our starting point and it worked quite well. Most people understood that greyed out stations meant the train did not stop there. We had one notable exception though; an unfamiliar traveller who thought it just meant they were less important stations and who would have got on the train (and not made it to his station). We thought we could fix that. 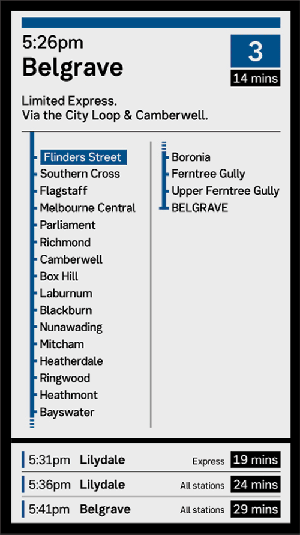 ITERATION 2: Our next version showed only the stations that the train was stopping at. Not listing the skipped stations provoked a mixed response. Some people were completely thrown, some were confused then moved on, and some people didn’t notice. 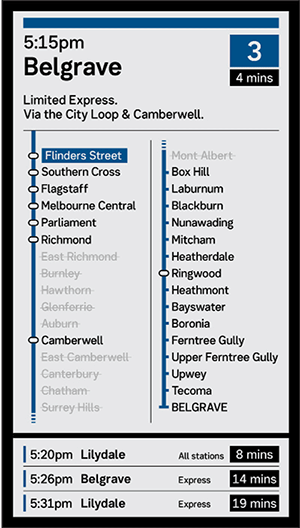 ITERATION 3: We then tried crossing out the stations where the train wasn’t going to stop. Two participants thought the crossed out stations meant there was a cancellation. 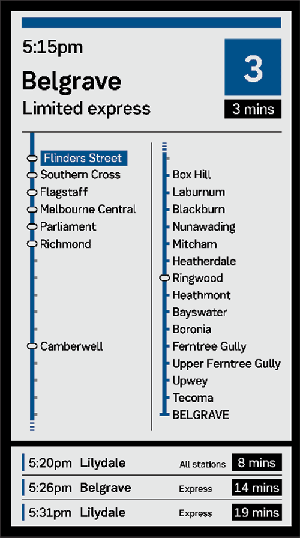 ITERATION 4: We resorted to the status quo — having dashes to show skipped stations. This seemed to work, probably because it’s a version of what happens at the moment. We still felt that it wasn’t catering well to unfamiliar travellers, so we kept trying. 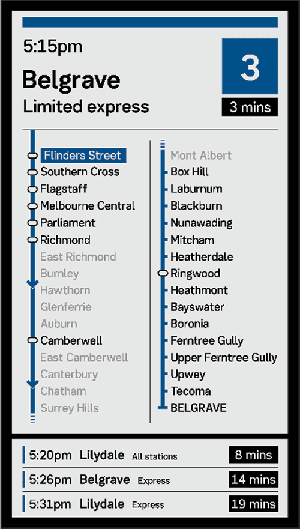 ITERATION 5: Our final test went back to having the stations greyed out but with a paler grey, no dashes at the skipped stations, and an arrow to show the train goes past those stations. It worked really well — everyone understood what was going on.

Based on all of that, the designs that you see at Flinders Street now follow these rules to show stopping pattern:

Why the new designs are better

This is the new “motherboard”- the 6 screens at the front of the station that tell you where all the trains are going from and to. There’s four key reasons why I think this is so much better than the random list of trains I complained about originally.

I always say that good design is easier with boundaries. In this case, we had some pretty strict scope limitations that influenced what we came up with — some of which helped us, and some of which didn’t.

The good news is, these are both things that TfV and PTV are working on. 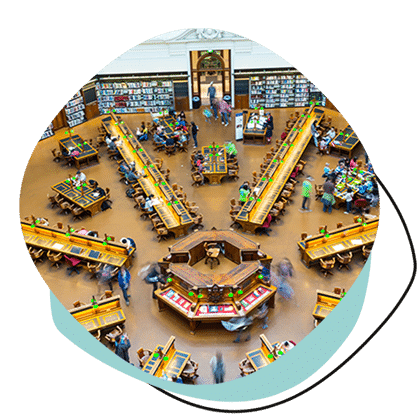 A multi-award winning initiative to reimagine a cultural institution for the 21st Century. Meld Studios helped the State Library of Victoria to define their future state vision, including how the building could be reimagined to support new services and the enhanced use of technology.

Curious how we can help? Lets chat.