Co-designing with the State Library of Victoria: How we did it, and why it paves the way for change 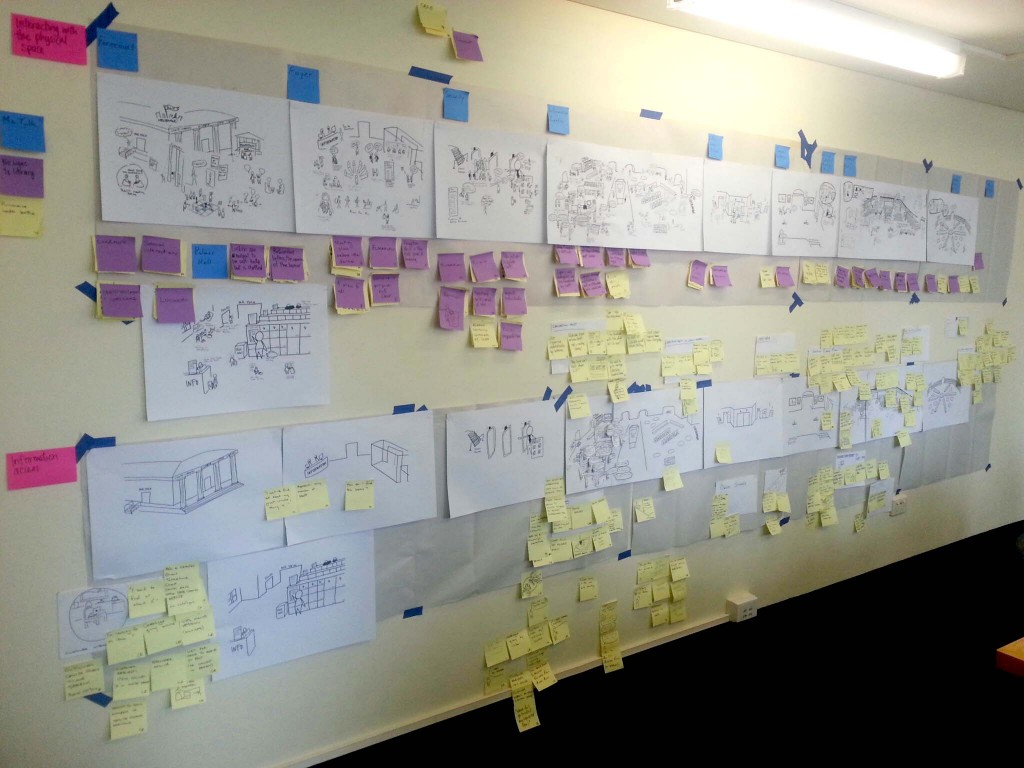 Recently Meld Studios partnered with the State Library of Victoria to help envision a way it might do things differently (and better) in the future. A future where the services they offered remained relevant to customers and created positive experiences for visitors and staff.

This did not mean telling the Library what to do and expecting the future to be a reality tomorrow. We both understood it was critical to engage the broader organisation throughout the project so that the shift required could actually happen. For this reason, the project was designed with a commitment to co-design, where a team of three service designers from Meld Studios and two Library staff (Ben and Bridie) worked hand in hand to build a shared vision for the Library’s future.

Our collective team worked and learned together. By the end of the project, Ben and Bridie had ownership of the vision, had confidence to lead the next phases of work and all Library staff were given the opportunity to shape their own future. They could begin leading the change from within, in an environment where Library staff were ready to change. Here’s how we did it.

1. WORK TOGETHER, LEARN TOGETHER 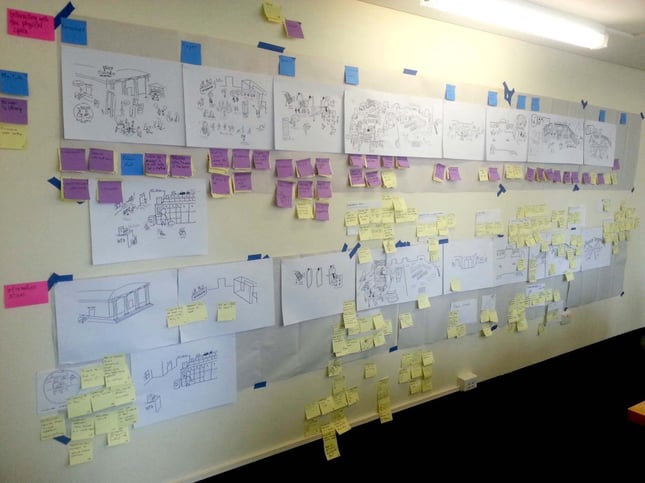 A team effort! Sketching, observations and insights from research

Design with them, not at them
Ben and Bridie are embedded in the organisation and have the relationships that can breed advocates. This means their role in advocating, defending and implementing the vision for the future is key to leading change. To make their role as effective as it could be, we worked and learned together as a team. This meant:

Committing to working as a team built up Ben and Bridie’s confidence in working more collaboratively and equipped them with the expertise and experience to lead change.

Think as a team
We were facing huge, complex challenges that were difficult to grasp. To capture our collective insights we did our analysis and synthesis upon the walls using post-it notes, rather than trading documents created by each individual. Doing our thinking on a wall created a shared understanding and we could think as a team. We captured our research observations, and insights on post-it notes then clustered them into groups to see the bigger picture and identify patterns. We did our thinking outside of ourselves and made sense of what we were hearing and seeing as a team. Each of us could be the voice of the customer and confidently tell the story that inspired the Library’s vision for the future. More importantly, Ben and Bridie were becoming expert in a new way of working that encourages and celebrates collaboration. 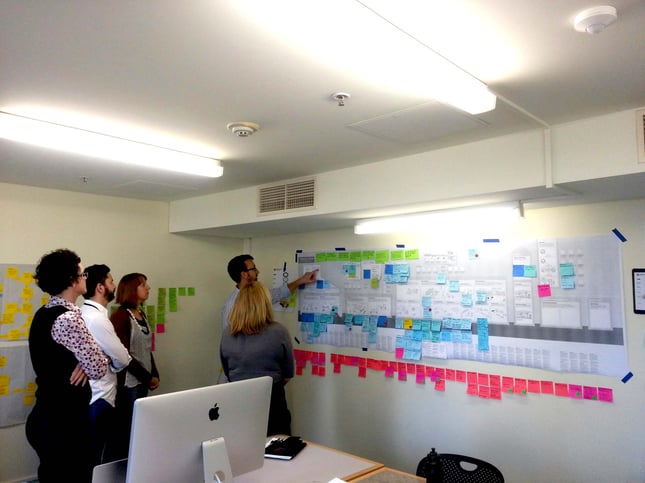 Ben doing a walk-through of our work for senior leadership

At one point, each of us had individual tasks to complete as we worked toward the final deliverable. Chris and I were in Sydney and Ben and Bridie were in Melbourne. Old habits quickly crept in. Luke opened up a spreadsheet and attempted to figure out the reality of kicking off 40 projects that relied on complicated dependencies. Frustrated and lacking momentum he got off his computer, printed the spreadsheet, cut it up, tore off a huge sheet of butchers paper and thought about it externally – outside of himself and on a wall. He put the puzzle together.

We worked together as a team and took the time to teach, rather than delegate, the hard stuff. Because we worked through the finer details of the analysis and synthesis process together, Ben learnt something for himself that shaped the way he tackled a new challenge.

Play to learn (and inspire an appetite for it) 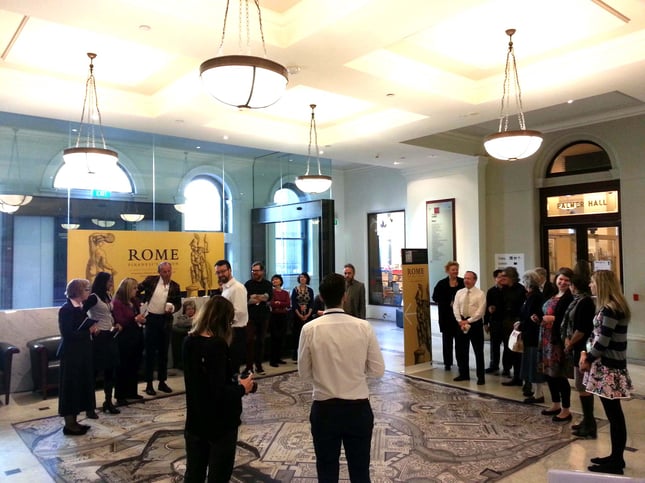 We carried out a live prototype in the library that tested the service environment the team had envisioned. We printed over 100 signs, scrambled together bits and pieces of furniture, bought 18 reams of black fabric and dressed the library to test the service environment and key services. Before the Library opened to the public, 75 staff walked through the doors and were met with our project team dressed as staff with cardboard ipads. Participants set out to achieve various tasks that would test the services in play. Library staff were (super!) engaged – the 60 slots to participate were filled in 2 days (and 75 people turned up) – and our team felt what it was like to do this, how easy it was to prototype and the huge value they could get from it. Some participants took on the personalities of customers and challenged our service concepts. One participant passionately represented the little old lady who couldn’t register online because she didn’t have a computer at home. Another requested a book from storage and didn’t want to wait for the next delivery time. Participants were able to feel the impact of the changes we were proposing, not just read about it. They showed us the challenges and weaknesses in our concepts and made them better.

This exercise inspired advocates and triggered critics amongst Library staff, and our team learned what worked, what didn’t, and why. We also demonstrated how easy prototyping is to do and how much more engaging it is. The best thing was when Ben said to me, “This was great. I’m going to do it like this next time.” 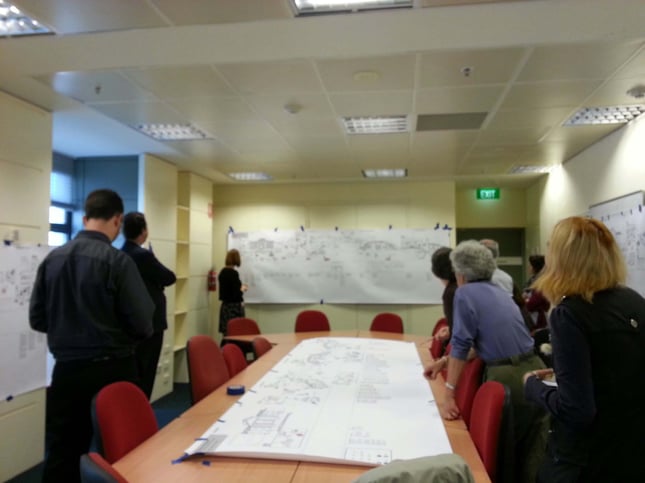 Bridie presenting to one of many feedback sessions with Library staff

Give all staff opportunities to shape their future
Our door was always open. We set up multiple channels for Library staff to give feedback throughout the process and after key milestones in the project. They were a mix of informal and formal, public and intimate forums. We also organised meetings, drop-in sessions, and put up visual maps that told the story of the Library’s services today. When we held workshops, every team was represented by an individual who was nominated by their respective team. These multiple channels gave all Library staff opportunities to shape their own future. This was valuable for our project team as we could:

By taking the time to listen and respond to feedback, some Library staff went from “No, we aren’t going to do that.” to “Actually, that idea could work if…” and “it would be better because”. Some staff shifted from being anxious about the change to actively engaging with us and shaping the change.

Seize every opportunity to share a story
Our team worked on site – we shared lifts with Library staff, waited in line for coffees at the cafe, attended staff meetings, chatted in hallways - we constantly shared our enthusiasm in the project. Seizing these opportunities gave the project (and our team) more visibility. Library staff confidently approached us to give feedback (good and bad) and chat about the changes facing the library. By reaching out that little bit everyday, we were able share stories that excited, challenged and informed. We didn’t do this deliberately, but this constant chatter about the project was slowly building engagement and momentum in an organic way.

Identify advocates – many advocates are stronger than one
Our project aligned with other projects in the organisation so we sought out those teams and shared the direction we were heading towards. It was so exciting to see how our work fed into theirs and vice versa, and this was a powerful story to share. Our team could stand up in front of our vision for the Library’s future and point to other teams in the Library who have kicked off projects that are a step towards that future. Other teams in the Library want to move in the same direction and we both want support to get there. By coming together and advocating a shared vision, both teams had a stronger sell in the face of change.

For more on managing change read Kimberley's blog post on what designers can learn from change management.